It probably won’t come as a surprise that engineers love their acronyms. If you’re not fully immersed in this world, it can become increasingly difficult to decode what may sound like a foreign language, and while we can’t explain every abbreviation you may come across in one blog post, we’re going to start by discussing the differences between EVT, DVT and PVT, or the engineering validation process. 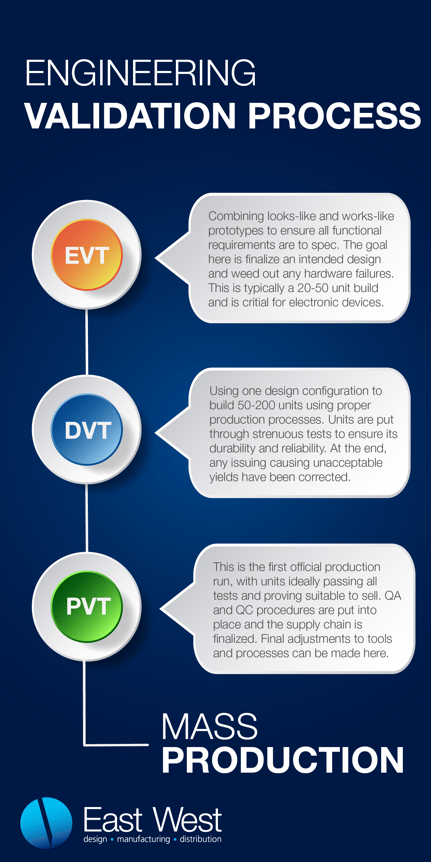 Before any testing can occur, the first step is a prototype build (also known as EP or Proto), which is essentially a low quantity (1-10 units) run combining engineering and design with the end goal of creating an MVP (Minimum Viable Product) the engineers can confidently claim is only a handful of iterations away from being mass production ready. Often these prototypes are significantly more expensive than the expected production build because there are typically few cost optimizations at this stage. The prototype should provide the team with a database of parts and model files that can be sent to the Manufacturer for an RFQ (request for quote).

You’ve got a working prototype, now it’s time to start testing. With a typical run of 20-50 units, EVT (Engineering Validation Test) is when looks-like and works-like prototypes are combined to ensure all functional requirements of the PRD (product requirement document) are being met. EVT is generally the most critical gate review for electronic devices and unlike the EP, this build is done with the intended materials and manufacturing process. It’s common for engineers to be present, as this is often the first time a Manufacturer is assembling the product, and up to 40% of units can fail for a variety of reasons. If any significant design flaws are uncovered after initial functional testing and analysis, there may be an EVT II build once these flaws have been addressed.

Now you’ve got the hardware ready and it’s time for DVT (Design Validation Test). While the goal before getting here is to have one mass production-ready configuration to test, it is common for this not to be the case. DVT focuses on perfecting tools and techniques for a consistent run and ensures products meet cosmetic and environmental requirements using both mass production tools and parts.

With a build of 50-200, units are put through rigorous tests such as burning, dropping from certain heights, submerging in water as well as extensive battery testing. This step is also crucial for products needing regulatory certifications such as FCC or UL. This is the final step before making units that are suitable for sale. At the end of DVT, you should be highly confident that any issues causing unacceptable yields have been corrected.

This may be the most exciting stage of the engineering validation process. PVT (production validation testing) is the first official production run, often 5-10% of the first run, where teams verify that the product can be made at the volumes needed for the target cost. Ideally, these units will be suitable to sell and will become part of volume ramp. It’s important to note that in PVT, your QA (quality assurance) and QC (quality control) procedures are developed which will allow the Manufacturer to check for any failures throughout the manufacturing process. As products come off the line, it’s the last opportunity for adjustments to tools to be made. Once performance and quality have been verified and signed off, it’s onto mass production!